Where did we go wrong?

Two of the topics they say you should avoid are politics and religion. Well my dear reader you know I never shy away from politics, but usually refrain from religion. but I have had enough already.

Everyday I log into Facebook to see more posts from my “friends” with their “proof” there is no God and even more “proof” that there is only science. Did you know the only reason we have the science we have today is because of religion? LOOK IT UP!

First things first. The Bible, Qur’an, etc were written by human kind. They are the words, testaments, and history of the people who lived in times before us. They are the written documentation of what those people saw and lived or at least what they believed they saw. How is that any different from the scientific documentation of today? The general population of the… 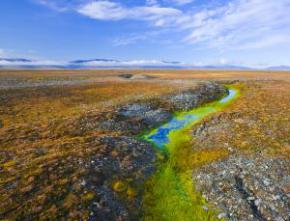 As if there weren’t enough problems with thawing tundra. A virus of unprecedented size has been isolated from Russian permafrost 30,000 years old and reactivated.

Dubbed a pithovirus after the Greek pithos, meaning a large earthenware jar like an amphora, the virus infects amoebas but does not appear to harm human or mouse cells.

Even so, now that this virus has been revived from the permafrost, so too could potentially harmful pathogens, possibly including viruses humans have never encountered before, the researchers say.

“There’s good reason to think there could be pathogenic viruses in there too,” says Chantal Abergel of Aix-Marseille University in Marseille, France, and co-leader of the team that discovered the virus.

“Thirty percent of the world’s oil reserves are thought to be hidden under the permafrost, along with gold and other key minerals, so exploration is bound to increase,” says Jean-Michel Claverie, co-leader of…

The Mars rover Opportunity looks over Endeavour Crater, where it turned up signs of ancient water. Scientists created this image by combining photos taken with different filters on the rover’s panoramic camera.

Ten years ago, a golf-cart-sized science lab on wheels started to roll across the surface of Mars. Within three months of landing, this Opportunity rover found signs that water had once pooled on the Red Planet. Fast forward to 2014, and the rover is still going strong. And it’s still finding evidence that water flowed on Mars — but not recently. The traces Opportunity has just found suggest that water might have existed some 4 billion years ago.

That water would not have been overly salty or acidic, scientists also report. In other words: Life might once have thrived on Mars.

There’s no actual water present now — certainly no Martian waterfalls or alien pools. But the rover…

A new study suggests that receiving an electrical shock to the brain shortly after recalling a troubling event can help a person forget many of the upsetting details.

The brain stores memories, both good and bad. But they don’t always stay put. A new study suggests that receiving an electrical shock to the brain shortly after recalling a troubling event can help a person forget many of the upsetting details.

The study is just the latest in a series by research teams to show that memories are plastic. That means they can be changed and sometimes even erased altogether. These findings could one day lead to new treatments for people who suffer from mental diseases like severe anxiety or post-traumatic stress disorder. Such treatments may be able to target severely disturbing memories and help patients forget them.

Forty-two people took part in the new study. All had severe depression. This…

Yes they are. An alien species 65 million light years away from earth, looking at us now with a telescope, would see dinosaurs. Yes, my dear Tyrannosaurus-rex, they are watching you right now!This is because of the finite speed of light. To understand this, one has to understand how we see an object. When you see the sun for example, it takes about 8 minutes for light from sun to reach us. This means that the ‘sun’ you see now is actually the sun that existed 8 minutes ago. Obviously you don’t see any difference, because nothing changes on the sun in those 8 minutes. So, when we look at objects that are very large distances away from us, the light that is reaching our eyes now, would have started from the object quite a long time ago.

So, basically, when you are looking at a beautiful twinkling…