Cross-posted from The H Word blog. 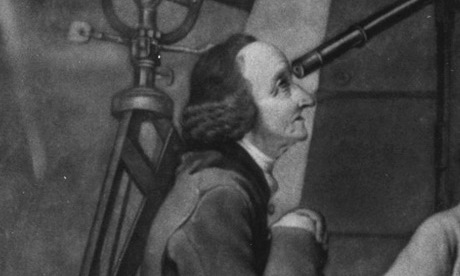 I only recently, and by accident came across this rather delightful 1778 mezzotint by James Watson among the collections of the National Maritime Museum. It was a somewhat hidden gem, having not been fully catalogued, although there are copies to be found elsewhere.

I have now updated the description, having realised that the full imageshows two servants-cum astronomical assistants of George Parker, 2nd Earl of Macclesfield (c.1696-1764). They are depicted in his private and exemplary observatory at Shirburn Castle, erected in about 1739.

In the detail at the top of this post is Thomas Phelps, then aged 82, and with him (see below) is John Bartlett, then aged 54. Most of what we know about them is what appears in the text given within…

By Rebekah Higgitt and James Wilsdon and first posted at The H Word blog. It is an edited version of their contribution to the book Future Directions for Scientific Advice in Whitehall, which is free to download here.

It is easy to chant the mantras of evidence-based policy, but less straightforward to determine which forms of expertise and evidence should count. There is now a welcome recognition across government that many policy problems benefit from multidisciplinary perspectives. But implicit hierarchies between disciplines persist, which are rarely explained or written down.

There have been several efforts to demonstrate the value of the humanities to policy in recent years, including helpful contributions from the British Academy, the Arts and Humanities Research Council and individual humanities scholars.

Some progress has been made, but as the historian Roger Kain put it in his October 2011 oral evidence to the House of…

This image looks like a curving, curling, abstract mosaic. It is, in fact, an attempt to capture what one observer saw when he looked through a filtered telescope lens at the Sun’s surface. Before photography developed, if astronomers wanted to share their visual experience they could only do it by drawing, adding an ability with pencil to the many necessary accomplishments of the observer. Photographing detail on the bright Sun was to prove a particular challenge.

When you know what it is you should be looking for, it is much easier to see. Familiar as we are today with spectacular images of the Sun in all kinds of different wavelengths, we have come to expect pattern, difference, structure, feathery and filament-like shapes and vast bursts of gases. This was unknown before telescopes could supply sufficient magnification and resolution.

Careful drawings were backed by verbal descriptions, but it was only…

Dehradun is the capital of Uttrakhand State in North India. It is situated in valley surrounded by Himalayas in the North and Shiwalik Hills to its south. Due to its salubrious climate and greenery and moderate weather, British officers used to retire to cold climes of Mussoorie which is hill station beyond Dehradun and established many institutions in Dehradun. One of them is Forest Research Institute.

Styled in Greeko Roman Architecture by C.G. Blomfield, the main building is a National Heritage which was inaugurated in 1929.

The Institute’s history is virtually synonymous with the evolution and development of scientific forestry, not only in India, but over the entire Indian sub-continent.

Set in a lush green estate spread over 450 hectares, with the outer…

Cross-posted from The Longitude Project Blog.

I recently did a brief talk for some of the staff at Nesta, including their Centre for Challenge Prizes, on our project and  outcomes of our research. During the discussion, someone asked what is, particularly for them, a very pertinent question: “Did the Longitude Act speed up the arrival of a solution?”.

My answer was something along the lines of “sort of, possibly, probably no…”. It is not the kind of question that we historians are necessarily very good at answering, involving as it does the counter-factual world in which no such Act was ever passed by the British parliament. Still, it’s an interesting idea to play around with.

All the things that first came to my mind were the reasons why it didn’t make the blindest bit of difference. For a start, it was not the only potential reward available…

The June 2012 transit of Venus was the occasion to turn our attention once again to the observers of the previous transits, in 1639, 1761, 1769, 1874 and 1882. Thus it is that we have the first English translation since the nineteenth century of Jeremiah Horrocks’s account of his 1639 observation. This seems long overdue, especially given the fact that the only other available translation, which is ‘more free in style than necessary’ (p. xxii), was produced by someone who lacked familiarity with the history of astronomy and introduced a number of errors.

The text of Venus in Sole visa

Aryabhata  was the first in the line of great mathematician-astronomers from the classical age of Indian mathematics and Indian astronomy. His works include the Āryabhaṭīya (499 CE, when he was 23 years old) and the Arya-siddhanta.

The works of Aryabhata dealt with mainly mathematics and astronomy. He also worked on the approximation for pi.

While there is a tendency to misspell his name as “Aryabhatta” by analogy with other names having the “bhatta” suffix, his name is properly spelled Aryabhata: every astronomical text spells his name thus, including Brahmagupta’s references to him “in more than a hundred places by name”. Furthermore, in most instances “Aryabhatta” does not fit the metre either.

Time and place of birth

Aryabhata mentions in the Aryabhatiya that it was composed 3,630 years into the Kali Yuga, when he was 23 years old. This corresponds to 499 CE, and implies that he was…