Like Loading...
After bringing iconic global landmarks like France’s Eiffel Tower, America’s Grand Canyon and Japan’s Mt Fuji alive on the Internet through its immersive “visual walkthroughs”, Google has now commenced work on putting 100 major Indian monuments and sites in that league. Once completed, architectural icons like the Taj Mahal, Humayun’s Tomb, and heritage wonders such as Khujuraho, and Ajanta and Ellora Caves will “visually explode” on the Internet in a “360-degree panoramic imagery”.
read here

I have been a cartographer for over 25 years and have had my private pilot’s licence for much of that time. The view of the pilot and the view of the cartographer are very similar. We are both looking down on the earth from a great height, trying to visually interpret what is on the ground and how it all connects together on our map. The order in which we, the pilot and cartographer, do things is often very similar, in that we are looking at the earth to transfer or locate the information onto or on our map.

The way our brain interprets the information can be different from person to person and from situation to situation. The pilot is using the visual information to navigate from A to B while the cartographer is trying to represent what is on the ground so the users of the map can do the same as the pilot, get from A to B. The symbology used by one cartographer may be great for their map but be totally inappropriate for others.

If a pilot makes an error in the interpretation between their map and what they see on the ground, the consequences could be dire.  If you think about it, if the cartography interprets what is on the ground incorrectly and depicts it on the map wrongly, the consequences could be dire as well. There have been many reported incidents of GPS navigation devices sending unwitting tourists on a trip they did not need to have, the same can be said for what the cartographer puts on their map, how it is displayed and the symbology used.

The way aeronautical charts have been put together have remained largely unchanged for a long time, although they are updated on a very regular basis to ensure that pilots are using the latest information available.  On the other hand many standard topographic maps are only updated when needed. Many people assume what they are viewing is up-to-date, both in a digital view and a hard copy. As soon as any data is published it is out of date and it is up to the user to ensure the maps they are using are fit for purpose. We have all become reliant on navigation tools using Goggle Maps or similar but have you stopped to take note of when it was last updated.

More and more pilots are taking advantage of technology i.e. GPS devices with moving maps. I am certainly one who likes technology both as a cartographer and a pilot, but in both vocations we need to be aware not to place too much reliance on the technology. It is mandatory for a pilot to know how to navigate without the use of technology, just in case it fails. It is also my opinion that cartographers of today need to know the underlying reasons behind maps and the way we put them together. 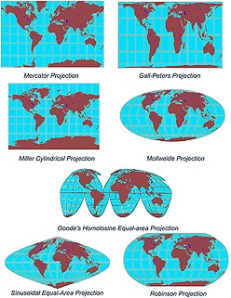 There are four basic characteristics of a map that are distorted to some degree, depending on the map projection used. These characteristics include distance, direction, shape, and area.

My article is not to discuss the benefits of map projections but to look at how technology is contributing to skills and knowledge being lost.

As a cartographer with over 25 years experience in the GeoSpatial Industry, I guess I have a slightly more critical eye when I see maps that are produced these days. It makes me cringe when I see maps that are missing some essential items like a scale, north point, legends, projection information or title. It is so easy these days to just press the ‘print’ button and have the software spit out the map. It may portray the data in the way the ‘cartographer‘ indented but it looses basic usability outside  the original production when it does not have these basic elements.

Technology has become more than a tool to help us but more and more a tool to do the work for us. How many of you rely on ‘spell checker’ or ‘predictive text’ to correct spelling or grammatical errors? I know I do and my spelling has suffered at the hands of technology. I look at my children’s homework and am often amazed at the poor spelling and abbreviated words. How much more effort is to type ‘great’ as opposed to  ’GR8′?

This sort of approach has crept into the ‘cartographers’ of today. Many maps are produced without really asking the question; “What is my final aim for the map?” and “Why was the original data produced?” Many data providers capture and store data that is useful on a statewide basis but if you are producing a local area map, maybe the data needs to be reprojected. Maybe the data was captured at 1:1,000,000 but you are producing a map at 1:50,000.

What was the original purpose of the data you are using for your maps? Have you read the metadata associated with your data, or did it even come with metadata. Too often I see data being used in a way that it was not intended. This maybe due to scale, symbology, attributes or just poor representation.  There is a saying “garbage in – garbage out” and this is very true when it come to maps. Just because your GIS software can symbolise your data in a certain way, is this really enhancing or degrading the original data.

Before ‘computer assisted cartography” each map was produced for a specific purpose and the cartographer would know about the source of the information and why they were producing the maps. Many maps were a work of art and the essential map elements were there to make it useful to the end users. I am truly amazed looking back at the maps produced by the early explorers, like Captain James Cook who mapped Australia over 200 years ago. They mapped the coastline from their ships using what we might called primitive tools but it was amazing how accurate they were. Today we just pull up the latest satellite image, assuming that it has been rectified correctly and is fit for purpose.

Rather than just pressing the ‘print’ button, ask yourself is that map useful to the end user and have I used data fit for purpose. Know why you are producing the map, know why the data was captured. Take the time to bring out the cartographer in yourself.

A map of the world’s countries by most and least emotional. Click to enlarge. (Max Fisher)

Gallup polling firm has surveyed people in 150 countries and territories on, among other things, their daily emotional experience. Their survey asks five questions, meant to gauge whether the respondent felt significant positive or negative emotions the day prior to the survey. The more times that people answer “yes” to questions such as “Did you smile or laugh a lot yesterday?”, the more emotional they’re deemed to be.

Following are the main results:

An exclusive look inside Ground Truth, the secretive program to build the world’s best accurate maps.

Behind every accurate Google Map, there is  more complex map that’s the key to our queries but hidden from our view. The deep map contains the logic of places: their no-left-turns and freeway on-ramps, speed limits and traffic conditions. This is the data that you’re drawing from when you ask Google to navigate you from point A to point B — and last week, Google showed  the internal map and demonstrated how it was built. It’s the first time the company has let anyone watch how the project it calls GT, or “Ground Truth,” actually works.

I just used google earth pro. its cool .you can create layouts with title ,legend, scale and north arrow directly on image and can save it. google earth provides it free for Educators and Teachers but not for students directly.

The courses are self-paced, where one can watch videos (or read text lessons) and apply the skills you learn. You’ll be able to connect with experts during the course via Google+ Hangouts.

At the end of the course you’ll have the opportunity to complete a project and earn a certificate. You can learn more about the courses and register now on the Mapping with Google site. As an added bonus, all participants will be given access to preview the new version of Google Maps.

If you’re wanting to learn more about Google’s geo products, this is a great opportunity!